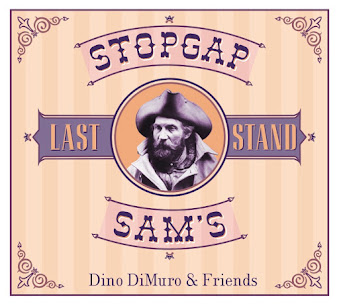 STOPGAP SAM HAS BEEN RELEASED!

Hard copies arrived on January 5 and I began mailing those out immediately. The Bandcamp release dropped on January 11. 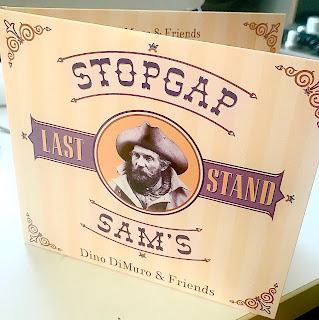 On December 12 I got my first request for the song Rip Van Twinkle from the Indie Criollo blog. 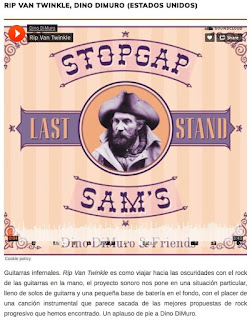 In a rough translation from the Spanish:

"Hell guitars. Rip Van Twinkle is like traveling into the dark with rock guitar in hand. The sound project puts us in a particular situation, full of guitar solos and a small drum base in the background, with the pleasure of an instrumental song that seems taken from best progressive rock proposals we have found. A standing applause to Dino DiMuro." 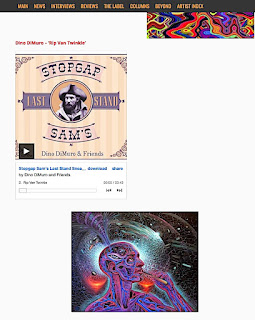 I also began getting reviews on Rip Van Twinkle:

"I just love the charming and soulful, wide arrangement of rocking instruments in the air. And the very powerful electric guitar fires up this track." - Music Lover Blog

"Sound quality is top notch and the guitar sounded great. I loved the many variations you had on your track, you are very skilled." - Lis Wonderland

"Rich engaging instruments, the guitar sounds impressive, I enjoyed the energy." - Now And Then Music Playlists

"Congrats to DD. Lovely rock. The guitar rock that is. Delivers nice vibes and sticky guitar tones. Will do well. Was RVT that chipper when he woke up. We wonder?" - ComeHereFloyd

Roadie Metal did this great callout and link! 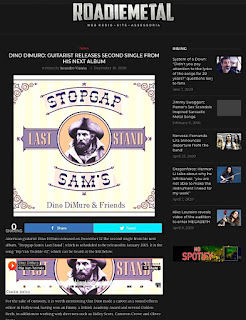 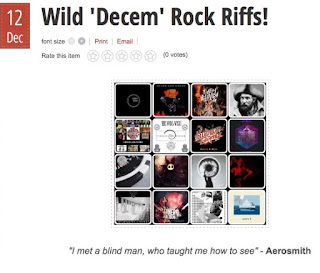 "A vibrant and melancholic experience is given by the song. It feels fun, it feels laidback, and overall it's just an amazing mood to vibe to." - Empty Room Productions

"Great guitar sound, very 70's. Love it. I like the way you use the tremolo bar. Slightly western sound. Great composition." - Raighs Factory 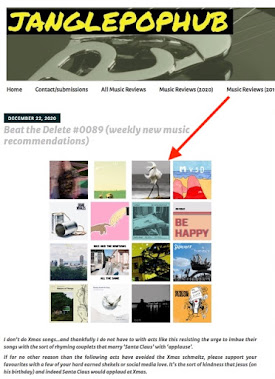 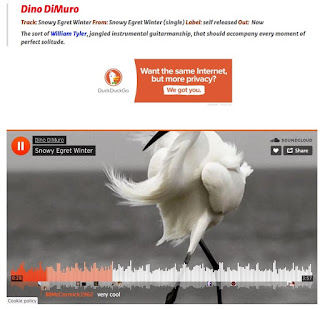 The long awaited review from Divide and Conquer!
https://www.divideandconquermusic.com/indie-music-album-reviews/dino-dimuro-the-dunning-kruger-effect6492728
"This album is defined by its variation in a lot of ways. The mixes vary as well as the styles and you’re never quite sure what you might get. That being said, you never encounter something like hip-hop or country. I wouldn’t consider the album one you need to start from beginning to end to fully get but if you do decide to do that I think your ears will be very happy."
Finally... I won a coveted Top Pick at baby sue music review!

Meanwhile, the first three tracks from Disc One are now posted at my SoundCloud account. 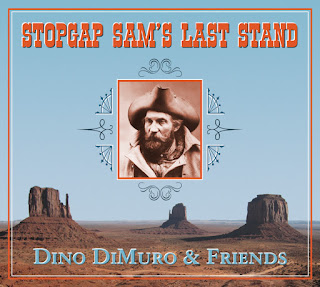 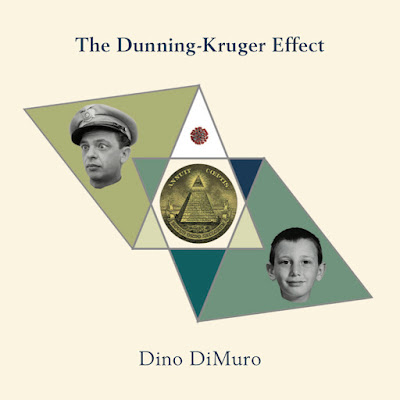 This is a page designed to keep you informed on all matters relating to Dino DiMuro's new Dunning-Kruger Effect CD!

WHAT ARE THEY SAYING ABOUT DUNNING-KRUGER? You ask...

BRAND NEW REVIEW of Dunning and I Don't Know Tomorrow in BabySue!

"You owe it to yourself to listen to this guy's music. Dino's unlike anyone else out there making music at this point in time."

A full album review on Divide and Conquer Music!

A nice review from Alt77

>>>“Speeder On The Rails” is inspired by the work of mr. Van Vliet. It begins equally menacing and cartoonish with the sound of a theremin. It continues, in a way befitting of the mentorship DiMuro received, with a sound equally tight and slackened, the soundtrack of a headache on a hot summer day. There’s, without a doubt, an order to the madness. It’s the work of someone that’s spent a lot of time with these musical ideas speeding around their brain. For that, it’s worthy of attention. <<

“This psychedelic quirk - Walt Disney on acid, you could say - takes you down a rat hole of the surreal, where you realize everything isn’t quite as it seems. Yet, you still venture ever deeper to see where you end up.” - Ian Lauder, Totally Radio

"I like the experimental nature of this!" - We Love Lofi Music Blog

"This one's a keeper!" - Joe Newman, The Rudy Schwarz Project

"If super quirky and being off in left field were a gift, Dino would be a walking Macy's store!"         Mario Tercero, Rock Drummer

"One of Dino's strongest albums in a long time - maybe ever!" Don Campau, Lonely Whistle Music

"We liked the old-school garage rock sound and the vibes are cool!" - indiesound blog

"Back to his Beefheartian Roots!" - Alan Rankin, Formosa Studios

"Pretty left of the dial, carving out its own path." Austin Town Hall blog

"A smooth blend of some rock and jazz elements with an artful experimental psych vibe to it all. Well made and confidently delivered." We All Want Someone To Shout For blog

My track "Speeder on the Rails" will begin random rotation around the 4th week of September on Radio Krimi!!   RadioKrimi.com

"Speeder" and "Getting Tired of the Five" are both airing on Dino's Jango Internet Radio Station, along with handpicked progressive rock bands!  https://www.jango.com/music/Dino+DiMuro

WHERE CAN I BUY OR DOWNLOAD DUNNING-KRUGER? (Sorry, these are not hot links!)

CAN I GO ON DINO'S TWITTER AND TALK ABOUT DUNNING? Of course!

DO YOU HAVE ANY COVERS BY GREG GIEROWSKI THAT YOU DIDN'T USE? Why yes! 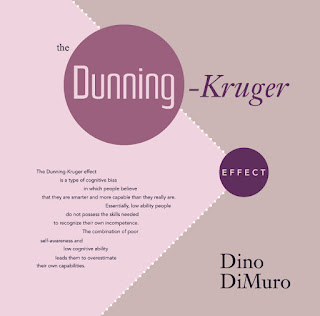 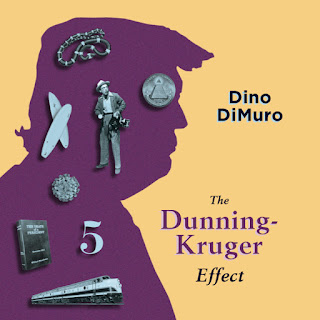 WOULD YOU HAPPEN TO HAVE A BIO PAGE FOR DINO DIMURO? I might! 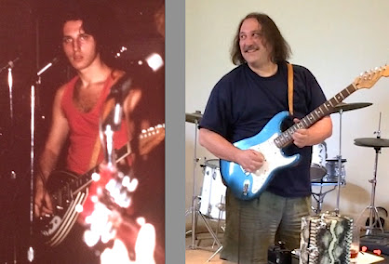 Dino DiMuro is an independent musician and sound designer based in Los Angeles.

Dino has been self-producing CDs and cassettes since the mid-80’s. On many of these releases he plays most everything except the drums, and on recent albums has taken on percussionist duties as well.

Dino DiMuro was born in Los Angeles just above the Hollywood freeway in 1957. After a short career as a rock guitarist in a band for hire (once opening for Van Halen), he became a motion picture sound effects editor, winning an Emmy, a British Academy Award, and several Golden Reels. Among his films are features by Ridley Scott, Cameron Crowe, and Oliver Stone; the Bourne Series; Revenant; and the sound design for the Netflix series NARCOS.

Dino released a series of albums in the 80’s and 90’s, while also reviewing for Option magazine. He has been profiled in Keyboard, Alternative Press, and BAM, among other publications and blogs. Finished with sound design, he is now on an aggressive release schedule of two to three CDs a year.

Dino’s music has been described as “Walt Disney on Acid” and is most often compared to Frank Zappa, Captain Beefheart, and They Might Be Giants. He also shows heavy classical, classic rock, country and folk influences. He has recently been investigating the inclusion of quirky, unexpected cover tunes like the organ theme from “The Ghost and Mr. Chicken” or the Narcorrido “Ballad of Heisenberg” From Breaking Bad.

Dino also has a Kindle novel ELMWOOD and an article about sound effects editing that can found on Cracked.com.

STOPGAP SAM HAS BEEN RELEASED! Hard copies arrived on January 5 and I began mailing those out immediately. The Bandcamp release dropped on...

recordings
My name is Dino DiMuro. I'm a 63-year-old Hollywood native with a lovely wife named Sharon, and our shared brood of kids and adults named Nick, Friday, Elizabeth, Sam, and Sarah.